How many newspapers will report Frontex figure with the caveat: “this may include significant double counting”? Is this not utterly irresponsible given the political implications and moral panic generated by inflated figures? I hinted to Frontex politics of counting in a piece on Calais in The Conversation : https://theconversation.com/calais-migrants-are-not-invadin… but didn’t expect a blunt admission like this. 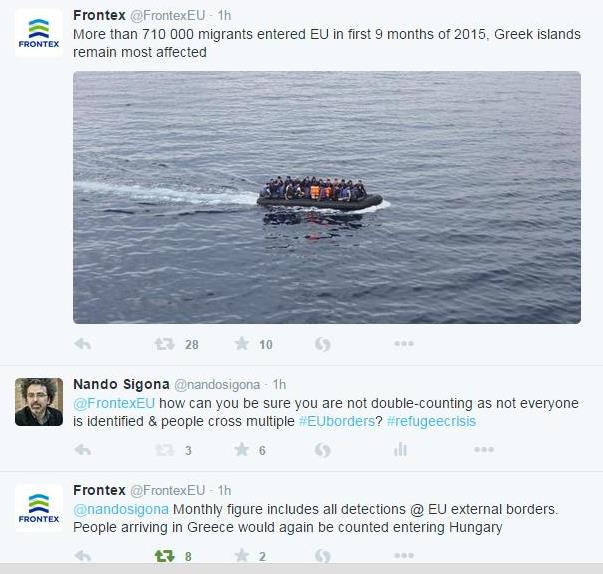 @FrontexEU how can you be sure you are not double-counting as not everyone is identified & people cross multiple #EUborders? #refugeecrisis — Nando Sigona (@nandosigona) October 13, 2015

Tom Nuttall (Charlemagne columnist, the Economist) contacted Frontex and had the following clarification

Still amazed how Frontex could release such sensitive figures so light-heartedly, considering the impact that numbers have on the moral panic re migration and the political debate. A reminder tha tFrontex needs to be made more accountable for its actions, including how & why they ‘inflate’ figures – especially given their expanding mandate & budget.

7 thoughts on “The politics of counting people at borders: Brief Twitter conversation with @FrontexEU”