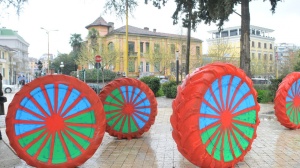 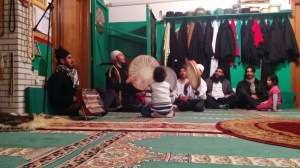 This article was originally published on The Conversation.
Read the original article.

By Nando Sigona, University of Birmingham

Italy has been experiencing a resurgence of xenophobia recently. Migrants and Roma have been violently attacked by gangs, and people claiming to be “ordinary citizens” have organised marches in racially mixed neighbourhoods to stir up unrest.

Against this backdrop, Enrico Rossi, the left-leaning president of Tuscany, has turned what appears to be a rather mundane photograph into a bold political statement.

In the photo, Rossi stands flanked by a family of men, women and children. It’s a Sunday afternoon in Florence. “Let me introduce my neighbours” reads the description posted on Facebook. His neighbours are Romanian Roma. 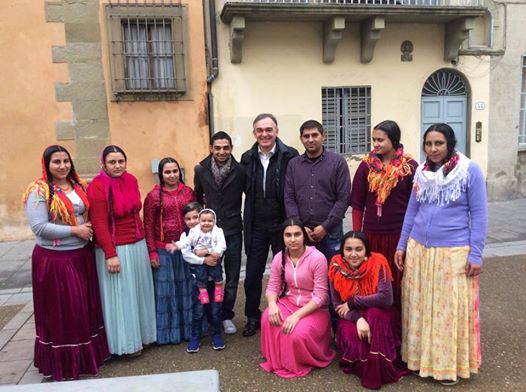 Enrico Rossi, president of Tuscany, and his neighbours, 2014

The picture was taken just a few weeks after Matteo Salvini, the new leader of the anti-immigration, anti-EU Northern League, paid a controversial visit to a Roma camp in Bologna to see how “tax money was spent”.

Salvini has made regular verbal attacks on Roma and migrants, a core part of his party’s attempt to rebrand itself as Italy’s answer to the French Front National. The steady rise in his approval rating would suggest that it’s working.

Meanwhile, the right is campaigning against Roma and new migrants at a local level too. In Rome, a crazy-train coalition of right-wing extremists, centre-right politicians and members of the mayor’s own Democratic Party is using immigration to fuel public anxieties in an attempt to force the mayor Ignazio Marino to resign.

But the animosity doesn’t stop there. Some of the same people who’ve been at the forefront of campaigns against undocumented migrants and Roma have now been accused of making money out of them as part of a sprawling inquiry into corruption in Rome.

The inquiry has exposed a network involving high-profile officials and mafia. They are suspected of bribery, extortion and corruption. So far 37 people have been arrested and 100 others investigated. The charges include making millions of euros by taking money meant to help support Roma and migrants. Officials have even been caught bragging about how exploiting migrants and Roma is more profitable than the drug trade.

Given all this tension, it is perhaps not surprising that Rossi’s neighbourly photo went viral. The picture attracted more than 6,000 Facebook comments, including from Salvini himself. Most were negative; many were violent and openly racist. (That said, there were 5,000 likes as well.)

Various accusations were levelled at the president in the comments. Many fell back on stereotypes about Roma: why, they asked, was the head of the region hanging out with foreigners, benefit scroungers, parasites, criminals? Why wasn’t he standing up for law-abiding taxpayers?

No matter if this Roma family includes children regularly attending a local school, and adults who work and have no criminal record; the people in the photo are not accepted as neighbours – they are dehumanised, and their real biographies trampled.

It is admirable that Rossi has held firm on his position despite the storm around the photo – even senior members of his party have voiced disapproval. He’s replied to a number of the comments made about the photo on Facebook. With just a few months to go before a regional election, it’s certainly bold to cause such a stir.

Given the current climate in Italy, his decision to fight this particular battle could affect his political career and electoral future – but at least for now, he doesn’t seem to care. One thing is certain: this particular photo will be plastered on leaflets and billboards everywhere as the next election approaches.

[For a brief on ‘Middle-Earth’ (Tolkien’s citation comes directly from the criminal network leader) in English: The Guardian; BBC, unfortunately they only focus on the involvement of Rome’s former mayor Gianni Alemanno and don’t explore the network targetting in particular of contracts for public services for the most marginalised groups in society.]

Enrico Rossi, president of Tuscany, and his neighbours, 2014

In the last weeks, Italy has witnessed a spiralling resurgence of xenophobia, with migrants being violently attacked by gangs of far right activists and marches against immigrants organised in highly diverse, and often deprived, neighbourhoods by alleged ‘ordinary’ citizens. The long list of episodes which are contributing to create a toxic climate and a widespread sentiment of moral panic, includes a visit by the media-savvy new leader of the Northern League, Matteo Salvini, to a Roma encampment just before the regional election in Emilia Romagna that provoked a violent response from anti-fascist and anti-racist activists and hours of media coverage for Salvini; and a 500 people-strong sit-in organised by the right wing student organisation Blocco Studentesco in front of a Roma camp in via Cesare Lombroso in Rome to protest against the alleged misbehaving of some Roma against a local school. Demonstrators were accused of intimidating young Roma students who were on their way to school.

What the Roma rights NGO OsservAzione has termed the ‘Salvini method’- the deliberate targeting of highly stigmatised and voiceless communities to grab media attention and feeds the induced moral panic with banal but highly effective sound bites – is spreading rapidly across Italy. Hardly a year from the Lampedusa tragedy, the solidarity that had sustained the response of the Italian authority through Mare Nostrum operation is vanished, and new migrants and Roma are made scapegoats for a society undergoing a prolonged period of economic stagnation and waking up from the promises of rapid transformation of the PM Matteo Renzi. While at the national level, the anti-immigration flag is carried by the Northern League engaged in a radical rebranding that would transform it from a regional and secessionist party into the Italian version of Le Pen’s Front National, at the local level, in cities like Rome an odd coalition of right wing extremists, centre-right politicians and members of the mayor’s own party (PD) is using immigration and the Roma in particular to fuel public anxiety in the attempt to force the current mayor Ignazio Marino to resign.

In such a climate, it is therefore remarkable and noteworthy a photo posted on his facebook page by the president of Tuscany regional authority, Enrico Rossi. The photo portraits President Rossi with his neighbours, a family of Romanian Roma. The caption includes the name of each member of the family and nothing else. This was enough to provoke over 5,000 comments, mostly negative, if not violent and openly racist, as well as 4000 likes. The accusations against the president reflect closely the repertoire of stereotypes on Roma people, and while they vary they can broadly be summed up as ‘we are the good citizens (ie. tax payers, law abiding, white, native, hard workers) and instead you choose to side with them (ie. foreigners, benefit scroungers, non-white, thieves, parasites, criminals)’. And it doesn’t matter if the Roma family includes children attending school regularly, adults that work and pay tax and have no criminal record. The point is that the people in the photo are not accepted as neighbours; they are dehumanised and deprived of their individual stories. It is admirable that the president hold his position despite the storm generated by the photo – ‘a social media disaster’ according to one of his party mate – and has also responded to many of the comments to his post individually. Whether or not this decision is going to affect the political career and the electoral fortune of Mr Rossi in the medium-long term is too early to say, but it is likely that we will see the photo reappear on billboards before the next election.