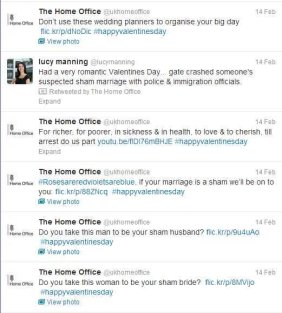 To ‘celebrate’ Valentine’s Day the UK Home Office is publishing on Twitter/Flickr a stream of archive pictures and videos  of sham brides and grooms arrested in UKBA operations. Repeating a ‘name & shame’ communication strategy used already to mark the arrest of a number of visa overstayers last summer (see my comment on the Mayapple Operation), Thresa May’s Home Office offers yet another proof of its ‘zero tolerance’ approach to unlawful immigration – no matter that it is its own continuous moving of the goalposts that is making many migrants unlawfully resident. This use of social media is rather disconcerting, especially because it show very little care for the pains the Home Office is inflicting on thousands of couples and families torn apart by immigration rules, pains that can hardly justify the discovery of a handful of ‘genuine’ sham marriages (you can read my comment on the family rules here).

There is also another (small) question mark here: in the caption to the photos, the Home Office claims to have conducted 300 operations and as a result prosecuted 230 people for sham marriages. Now if I understand the maths  and obviously this is a very rough calculation, assuming that for any successful operation they have prosecuted at least 2 people (bride and groom), this would mean that about 115 operations were successful, which leaves one thinking: what about the rest? Did the Home Office intervene to stop about 185 alleged sham marriages that were in reality genuine (even in its own narrow terms)? Have they ever apologized to them? Definitely not an happy Valentine’s day for them.

5 thoughts on “Happy Valentine’s Day from the Home Office”