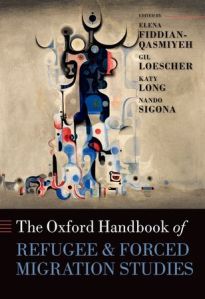 The Editors of The Oxford Handbook of Refugee and Forced Migration Studies are pleased to report that it is now entering the production stage and will be published by Oxford University Press in Summer 2014.

The Handbook‘s state-of-the-art contributions are divided in seven major parts:

The Editorial Team is also very pleased to announce that the leading modernist artist, Ibrahim El-Salahi, whose work was recently celebrated in a major retrospective show at the Tate Modern (London), has kindly provided the dynamic cover image for theHandbook.