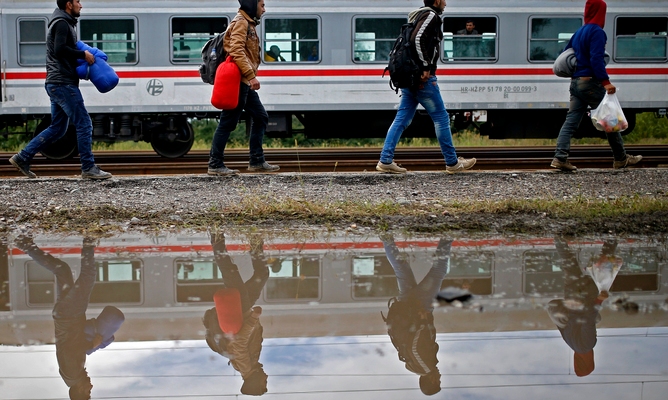 According to the agency, this represents an “unprecedented inflow of people”, offering as a comparison data from last year, when 282,000 entries were recorded in total.

I found out about the data release via Twitter. Alarms bells immediately rang.

The numbers thrown out by Frontex are not only a noticeable increase on 2014 figures. They are also significantly higher than data published recently by the UN and the International Organization for Migration on the number of people entering the EU irregularly by the sea. These showed 590,000 estimated arrivals.

These figures are immensely important. They have a profound impact on the public debate about the refugee and migration crisis. They are quickly picked up by the media – especially when they change dramatically. Anti-immigrant politicians looking for definitive confirmation that the EU is being invaded are just waiting for figures like these to come along to bolster their arguments about closing the borders.

I have been concerned for some time about how Frontex collects, collates and presents data from different sources. I have been worried that the agency conflates the number of border crossings with the number of people actually entering the EU.

The two are not necessarily the same, especially if one considers the land route from Greece via the Balkans. People who arrive in Greece are counted by Frontex as crossing EU external borders. The very same people, however, then leave the EU into countries such as Albania, Macedonia and Serbia, only to reenter via Hungary or Croatia in order to reach their preferred destination (such as Germany). If for any reason an EU country returns the people to a transit country (as Hungary has been doing with neighbour Serbia) and make another crossing into the EU, they appear in Frontex data for the third time.

With this in mind, I decided to probe Frontex’s claim via Twitter.

To my surprise, after just a few minutes I got a reply – and a remarkably candid one. Frontex plainly admitted that it has double counted migrants entering the EU. It said that yes, people entering Europe through different routes are likely to be counted twice.

I was amazed that the agency would release such a politically sensitive figure (710,000) so blithely. Frontex must be well aware that these numbers could have a profound effect on how Europe deals with this ongoing crisis.

This is not an attempt to deny that the EU is experiencing a sizeable migration flow, but to draw attention to the responsibilities that befall an agency charged by the EU with the task of coordinating the management of its borders.

Frontex eventually issued a “clarification” about these numbers. It added a paragraph to the end of its press release stating:

Frontex provides monthly data on the number of people detected at the external borders of the European Union. Irregular border crossings may be attempted by the same person several times in different locations at the external border. This means that a large number of the people who were counted when they arrived in Greece were again counted when entering the EU for the second time through Hungary or Croatia.

Despite this clarification and its admission that a “large number” of people have been double counted, the headline of the press release remained the same – continuing to imply that 710,000 had entered the EU.

How many newspapers will report the Frontex figure with the hastily added caveat? How many will simply ignore it and report the headline number?

To me this story is a reminder that we should all be more watchful about how numbers on the refugee crisis are used by the various actors involved.
Frontex needs to be made more accountable for its actions, especially given the expanding mandate that EU states have accorded to it.

Nando Sigona, Senior Lecturer and Deputy Director of the Institute for Research into Superdiversity, University of Birmingham

This article was originally published on The Conversation. Read the original article.

3 thoughts on “Seeing double? How the EU miscounts migrants arriving at its borders”