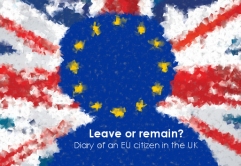 We had a few friends and family around for my daughter’s second birthday on Sunday. Party food is always a matter of debate in my household, sausage rolls vs pizza, egg sandwiches vs frittata, party rings vs homemade apple cake. Usually, the compromise is found by doing all of them, especially if the Italian nonna is joining the party. Digesting the news of the day between a glass of prosecco and a cup of tea, consensus was reached that Ian Duncan Smith’s sudden departure had little to do with a claim for moral high ground against a government he served from six years (despite evidence of his catastrophic incompetence in handling the reform of the welfare system). ‘It is the EU referendum, stupid’, concluded our panel of strongly interest-conflicted EU citizens living in the UK. How on earth David Cameron thought he could run a three-month long referendum campaign maintaining discipline in the Conservative party is a genuine mystery.  This is an opportunity in a generation for Eurosceptic Conservatives, fair play is not on the cards and more of such spectacular resignations must be planned in the coming weeks. Meanwhile, all quiet on the Labour front, so much one could doubt a referendum is even planned. Perhaps this is part of a cunning strategy by Corbyn and co.: if you sit by the river long enough, the bodies of your enemies will float by. Not sure if the corpse of the EU counts as collateral damage.

To read the first entry in my EU referendum diary: Leave or Remain?