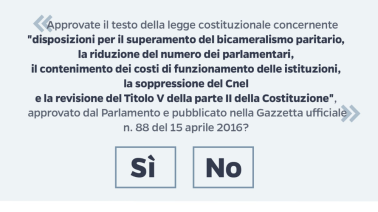 To call a referendum on such a complex matter – read here to find out about CNEL and don’t feel ashamed as the majority of the 19 million Italian voters who voted to keep it have no idea either –  at this time of international political turmoil  was a political and arithmetic mistake. Opposition parties (including on the left) knew they had few chances of defeating Renzi at the general election, but they were better at math.

A few data that may help to put Matteo Renzi’s defeat into perspective. And yes, of course, a referendum is not an election, but…
– General election (2013, 75% turnout), the Democratic Party (PD) led by Pierluigi Bersani wins 10 million votes which is well below expectations and leads to Bersani’s stepping aside as leader of the party.
– European election (2014, 57%), for the first time the Democratic Party goes to an election with Matteo Renzi as leader. The party wins 11,2 million votes. Impressive result given the low turnout. Renzi becomes the most electorally successful socialist leader in Europe.
– Constitutional Referendum (2016, 65%), Renzi’s reform receives 13.5 million ‘Yes’ votes and he didn’t even have the full support of his own party, according to exit polls 25% voted ‘No’.
What will Renzi do next? How transferable is his political capital?
The ‘no’ front is a veritable mixed bunch (accozzaglia) which includes many people one may not even want to share a piece of bread with. Even less with their international friends.

Hope the exit polls in Italy are right. This vote looks to me to be more about the Euro than constitutional change.

Any possible centre-left government in Italy will have to tap into Renzi’s legacy.
One just needs to consider how the different political forces contributed to the referendum result. I am hearing quite a few left-lining friends that are celebrating this morning because they got rid of Renzi. Some were genuinely concerned for the Constitution, others had a more opportunistic approach a la LEXIT, and are energised to ‘rebuild the left’ or happy to preserve the ‘purity’ of their values. Does this fit the definition of being politically delusional?